Presidential elections are a farce. After billions of dollars and tons of slanderous speech thrown about by candidates, pundits, and Facebook soapboxes, American voters invariably wind up with the inadequate "lesser of the two evil parties" choice. We find ourselves voting for bits and pieces of our candidate's platform, even if the other bits make us feel morally queasy. We try to ignore the fact that topics like climate change, international aggression, and free trade oppression seem to have already been decided by all of our recent mainstream candidates. Acquiescing to the wealthy and prioritizing defense spending seem to also be unavoidable pitfalls for politicians these days. In fact, positions on these topics are as rooted in our political culture as subsidies for big oil.

While old school voter suppression and sketchy voting software aroused my suspicions on election day, the federal elections overall held little drama for me. I suppose I didn't believe a huge difference would be made. Of course, I'm wholly invested in the success of health care reform, and want to see planned parenthood stick around as much as any self-respecting lady. I also see the value in having a president who understands what it's like to earn success instead of receiving it as a graduation present. A president who can inspire all young children, regardless of race or ethnicity, to believe that they can one day be president, too. There's real inspiration to be gained from this man, and I appreciate that.

But apart from social programs, and an ability to connect with non-wealthy Americans, I didn't see a huge difference in the policies of each candidate. I'm relieved that Obama won, for several reasons. But mostly because I was mistrustful of Mitt Romney's utter misunderstanding (at best) and resentment (at worst) of low-income Americans, minorities, and women.

On the local level, however, I had more hope. Maryland made some bold moves this election year, and nearly all of the questions on the ballot were meaningful. The notable ones were:

5. Re-districting: Basically, gerrymandering that resulted in republican representative Roscoe Bartlett gaining significantly more democrats in his district. As anticipated, this shift was his undoing, as his democratic challenger was able to unseat him. Maryland lost one republican congressperson, and gained a democrat. Sleazy win?

6. Marriage equality. Marriage equality. Marriage equality. We became the first state to vote to support equal rights for  our neighbors. I'm so, so glad that we voted the way we did, and so happy that ALL of my friends' families will now have equal protection under the law. I know I should be proud of this vote, but initially I only felt ashamed to live in a society where the rights of a minority group are decided by the will of the majority. Rights are not for voting on. Rights are rights. Period. But, as MY loving life partner pointed out, progress is made in small steps, and our flawed society is slowly working on correcting itself. So, I'm happy that we're making progress, despite the ugliness that might stand in the way. And in the end, I'm happy to say that LOVE WON in Maryland.

7. Casino gambling. It already exists in Maryland, but this question moved to expand it. I was almost sure it would pass, although I voted against it (gambling may raise revenue, but almost always does so at the expense of low-income folks), because of the plethora of "yes on 7" ads I saw about town. They must have spent a fortune on this, so I was surprised to see the margin narrower than I had expected. Win for state revenue. Lose for state residents.

There were also some ballots I was watching in other states around the country. Namely, I saw California's vote to label GM food products as a chance for America to show some common sense when it comes to consumer protection. But, after a 46 million dollar investment of mostly out-of-state funds, the agribusiness giants were able to convince voters that ignorance is bliss.

I was happy to see sensible drug policies passed in Colorado and Washington. Short-lived though they might potentially be, these decisions move away from the ineffective and irresponsible habit of incarcerating non-violent offenders.

And of course, I was happy to see marriage equality take great strides in other states: Maine voted to allow same-sex marriage, while Washington voted to KEEP its current same-sex marriage law. Minnesota voters chose not to ban future same-sex marriages, which is still something (this is when I need to remember my lesson about society moving forward in slow steps...).

I am always happy to see love win, and I'm proud of those who fought so hard to make it happen. Overall, I'm pleased with the outcomes of the elections, albeit still disillusioned about America's politics.
Posted by Natasha P. at 7:23 AM 1 comment:

Look to this day! For it is life, the very life of life. For yesterday is but a dream, and tomorrow is only a vision. But today well lived makes every yesterday a dream of happiness, and tomorrow a vision of hope. Look well, therefore to this day!Such is the salutation of the Dawn.
Posted by Natasha P. at 7:29 AM 1 comment:

Congresswoman Susan Collins recently said that the current laws protecting women from gender discrimination in their salaries are "adequate." Well, I guess that's an appropriate word choice. After all, in 2012 women still earn only 77% of what men earn for equal work. So, I wouldn't call these laws to protect women "excellent." If I were assessing their performance, I wouldn't give these laws an "exceeds expectations." In fact, giving them a "meets expectations" seems appropriately fitting, since my expectations are that greed, patriarchal misogyny, and racism will be played out in the majority our congress' legislative agenda for social issues.

Not a single republican voted for the Paycheck Fairness Act, which sought to require employers to demonstrate that any discrepancy in salary between women and men was not based on gender. It would have also protected employees from employer retaliation if they share salary information with their co-workers.

Some Republicans cited an undue burden on small businesses as their reason for opposing the bill. Well, sure, if you fire your employee because they talked about their paycheck over the water-cooler, and then you're sued for it, that would be a burden. But maybe don't do that. And sure, if you pay women unequal salaries and are then asked to prove your decision wasn't gender-based, that would also be a burden. But maybe don't do that, either.
Posted by Natasha P. at 7:22 AM No comments:

"I Will be a Hummingbird"

A few years ago, I posted about a lovely story I had heard. It had to do with the power of small, meaningful actions against seemingly unbeatable odds. Here's a nice spoken version of that story with animation: 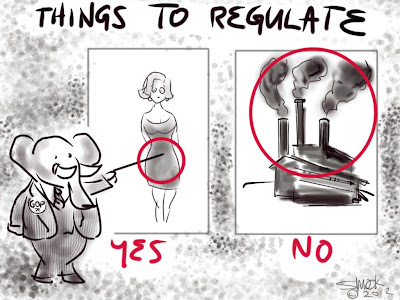 This sums up so much of how I feel about U.S. politics
Posted by Natasha P. at 8:24 PM No comments:

Many of them were opposed, and some were on the fence. One admitted to changing his mind after listening to testimony from loving same-sex couples. Overall, the Maryland House of Delegates rose above the contentious rhetoric this evening to strengthen the value of family in our state. It wasn't an easy decision for some of them, but they chose to do the right thing.
It's not a sealed deal yet, however. The Maryland state Senate still has to vote on it, and Governor O'Malley has to sign it (which he's promised to do). The "anti-gay marriage" people have already promised a petition to take the whole thing to a referendum. Well, bring it on! I'm fairly positive that we as a state can pull off this act of decency.
Delegates who voted yes (If you live in MD, call and thank these ppl):

The title of the House oversight and Government Reform committee's panel to discuss birth control coverage by religious employers revealed disturbing single-mindedness on an issue that impacts more than one group, and carries severe ramifications for health care policy & gender equality in the US:

“Lines Crossed: Separation of Church and State. Has the Obama Administration Trampled on Freedom of Religion and Freedom of Conscience?”

That's it. No mention of women. By framing this as a religious freedom issue, reproductive rights and women's health are consequently irrelevant to the discussion.

The misogynistic policies and rhetoric in this country have been getting out of control for a while now, but the frightening thing is the relative lack of outrage and protest they've been garnering. The fact that the committee chose to title the above mentioned hearing as they did, and that women were literally not allowed to partake in it, is soaked in patriarchal oppression and discrimination. It really shouldn't be so difficult for Americans to tell wrong from right. In a democratic society, not allowing women to testify on a measure that directly and negatively affects their well-being is WRONG. Plain and simple.

Oversight Committee Chairman Darrell Issa (R-Calif.) justified his decision to block women from testifying against the issue by claiming it was about religious freedom, and NOT birth control. A decision that would prevent female employees of religious institutions from receiving coverage for birth control is not about birth control, and thus you get to see this picture of the people who were allowed to testify: 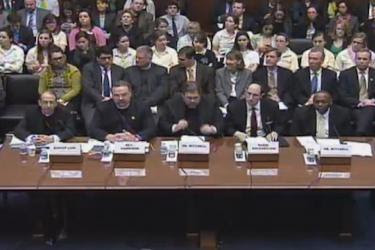 This picture has been spread like wildfire on the internet, which indicates that people might have some uneasy feelings about it. We know that it is wrong. We know that it is unfair. As Erin Gloria Ryan of Jezebel put it, this hearing "showed the particular brand of contempt, disdain, and dismissiveness with which the right wing and some religious leaders approach women's health."

These men (and women who internalize their oppression) must really feel threatened by the power and strength of women, otherwise they wouldn't be so frantically trying to infringe on our rights. It would be funny, if it didn't have such dire consequences for health and equality in the United States, and if it weren't so indicative of the hateful fantasy world that many influential people in our country live in.

the truth is not spoken by permission

Natasha P.
Takoma Park, MD
I believe in independent media, freedom of expression, the power of truth, the [debilitating] power of ignorance, and the ability within all of us to teach, to learn, and to grow. 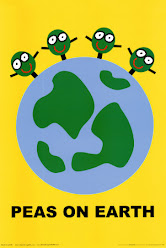 Flowers of the Week

Become a Friend of Pea's Peace! 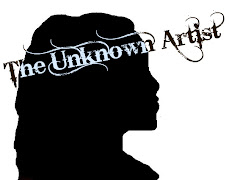